Let’s get talking: Exploring social value in the circular transition with Adam Minter 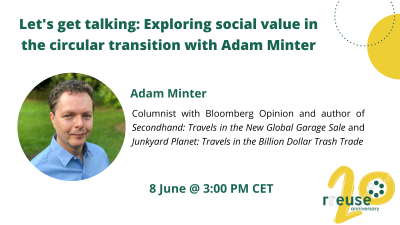 As part of its 20th anniversary celebrations, RREUSE will be holding its first episode of the series Let’s get talking on 8 June 2021 @ 3:00 pm CET.

In this episode, Adam Minter will be joining us to explore the social dimension within the circular transition. The discussion will address, among others, different interpretations of what social value means, how it can be better reflected within the circular economy and how to best support it through policies and tools linked to the green transition.

Adam Minter is a columnist at Bloomberg Opinion and is the author of Secondhand: Travels in the New Global Garage Sale and Junkyard Planet: Travels in the Billion-Dollar Trash Trade, a critically-acclaimed bestselling insider’s account of the hidden world of globalised recycling. He regularly speaks to groups about the global waste and recycling trade including colleges, universities, trade groups, TEDx, and an invited lecture to the Royal Geographic Society in London. He has been cited, quoted, and interviewed on recycling and waste by a range of international media such as The New York Times, Vice, NPR, BBC, The Huffington Post, and CBC.