Let’s get talking: Exploring social value in the circular transition with Virginijus Sinkevičius 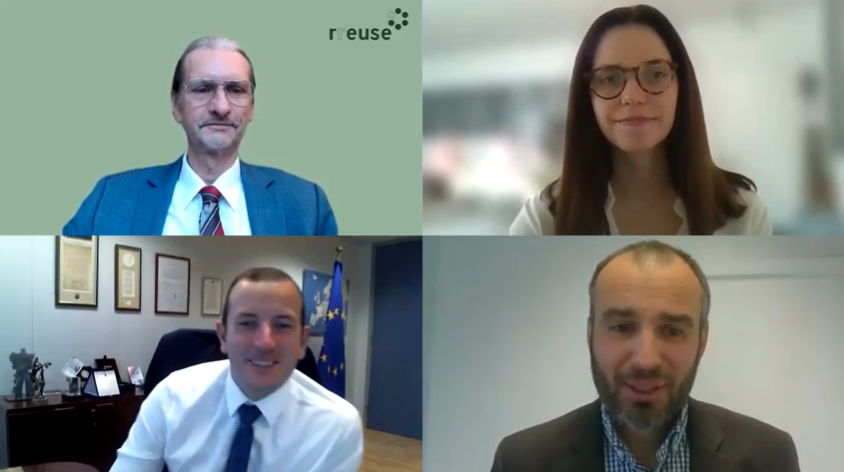 “Growth in the environmental goods and services sector creates local jobs, in particular when more labour-intensive activities, are promoted. With targets and other environmental policy measures on reuse, repair and recycling, we want to make sure that these activities flourish.”

RREUSE president Matthias Neitsch, and RREUSE director Michal Len met with EU Commissioner Virginijus Sinkevičius and had a conversation on the social value in the circular transition, as part of the celebrations for the 20th anniversary of RREUSE. The main goals of the meeting were to identify the meaning of social value for the Commissioner, to discuss the role of the Circular Economy in delivering social value, as well as to locate opportunities for mutual support between the Social Economy Action Plan and the Circular Economy Action Plan.

This discussion was the third part of a conversation series, the first two parts of which included meetings with Lakshmi Narayan, Co-founder of the trade union Kagad Kach Patra Kashtakari Panchayat (KKPKP), and Adam Minter, Columnist with Bloomberg Opinion and author of Secondhand: Travels in the New Global Garage Sale and Junkyard Planet: Travels in the Billion Dollar Trash Trade. While different views and perspectives on the circular economy were shared, the idea of combining circular activities with social objectives was present throughout all discussions.

EU Commissioner Virginijus Sinkevičius expressed great enthusiasm for the Green Agenda and continues to consider it a high priority despite the challenges Europe has been facing over the past years.

“I believe that social value is the ultimate measure for the success of any policy and this is what makes policy measures legitimate, more reasonably implementable, and effective.”

The promotion of the Circular Economy is one of the priorities found in employment and education policies. The Commissioner emphasized that the newly published Social Economy Action Plan supports social enterprises and aims at benefiting the Circular Economy, saying that social enterprises are in the fabric of our society: they currently represent around 6% of the workforce but have a significantly broader outreach. Their work in the Social Economy contributes to the green transition by developing sustainable practices and promoting inclusive solutions that foster short value chains and facilitate local production and consumption. The potential of the Social Economy Action Plan in supporting the Circular Economy can be further promoted by raising awareness of the scope for greater uptake of such practices, and encouraging partnerships with mainstream businesses, public authorities, and research institutes.

“The new Circular economy action plan actually highlights the potential of the
Social Economy, which is a pioneer in job creation, linked to circular models.”

The Circular Economy Action Plan was introduced in March of 2020, while the Social Economy Action Plan was released in December 2021. Answering Matthias Neitsch’s question about how the two reinforce each other, Commissioner Virginijus Sinkevičius emphasized that the European Commission has planned actions that highlight both Action Plans, as the synergies between the two are of critical importance for social enterprises in Europe. More specifically, the Commission will issue guidance on how to support partnerships for the Circular Economy between social enterprises and other actors, including mainstream businesses. They will also raise awareness on the Social Economy in the context of the European Circular Economy Stakeholder Platform, and the Enterprise Europe Network.

Moreover, Lifelong Learning and Social Innovation will be promoted under the European Social Funds, as the Circular Economy remains high on the European Commission’s priorities. The Commission is working with the Member States to encourage them to channel resources into forward-looking projects aiming at supporting an inclusive Circular Economy. The ambitious plans that the Member States have proposed for the use of public funds for the green transition need to be implemented appropriately. In the current climate, everything is pointing in the direction of using fewer resources. There is hope that this signifies a bigger shift toward the Circular Economy.

Following these statements by the Commissioner, Matthias Neitch noted that the repair and maintenance sector restores products such as machinery, equipment, and other goods to working order, and ensures the safety and optimal performance of products. He highlighted that in doing so, the sector creates new local opportunities and occupation possibilities for workers with various skill sets. The creation of new jobs in combination with the lower consumption of resources creates a cost-effective, sustainable solution. This will not only benefit the people, but it will also make the Maintenance Economy an important component of the broader Circular Economy.

“In many fields of re-use, the social economy players are some of the most visible.
Social enterprises are often the leading players in the second-hand market,
and ensuring we create long-living products which can be donated and re-sold by social enterprises
is the best way to create social value.”

Aiming to make sustainable products the norm, the Sustainable Products initiative, which is one of the flagships of the Circular Economy Action Plan, broadens the scope of eco-design and goes beyond energy-related matters, embracing product durability, reusability, upgradability, and repairability. Commissioner Virginijus Sinkevičius highlighted that this course of action will bring environmental benefits, but it will also present cost-saving opportunities, overall becoming a highly advantageous initiative for the people. This initiative will serve as a framework for future improvement of the environmental performance of different categories of products. There are plans to implement the initiative and supplement it with further measures towards effectively creating a right to repair, and encouraging customers to choose products with lower environmental impact.

The importance of Eco-Design, Producer Responsibility, and treating hazardous chemicals

Overall, as Commissioner Virginijus Sinkevičius noted, the Eco-Design Directive helps consumers reduce costs, and rules on waste management and producer responsibility ensure that the polluter is the one who pays. When it comes to hazardous chemicals, it is important that they are dealt with upfront and not after the damage to the people’s health and the environment has already been done. Working towards achieving such goals will not only protect the environment and our own wellbeing, but it will also create jobs and provide opportunities locally, especially around the actions of reuse, repair, and recycling.

“The planet is clearly telling us that we need to change and, although great effort will be required, there is no reason why we can’t help the economy flourish
while also preserving the balance of our planet.”

When thinking about the recovery from the crisis caused by the textiles sector, Commissioner Virginijus Sinkevičius said that we need to consider the environmental impact of the industry. This includes increasing competitiveness, applying circular economy principles to production, products, and consumption, as well as updating waste management guidelines, and reducing packaging waste. This is directly related to the presence of microplastics in the environment, which is particularly concerning. The European Commission will be addressing the issue and developing a policy framework for bio-based, compostable, and biodegradable plastics.

The European Commission’s dedication to prioritising the Green Agenda and promoting the Circular Economy and the Social Economy is very promising for social enterprises active in re-use, repair, and recycling, and indicates that steps in the right direction are actively being taken.

Watch the video of the dicsussion

LISTEN TO THE DISCUSSION