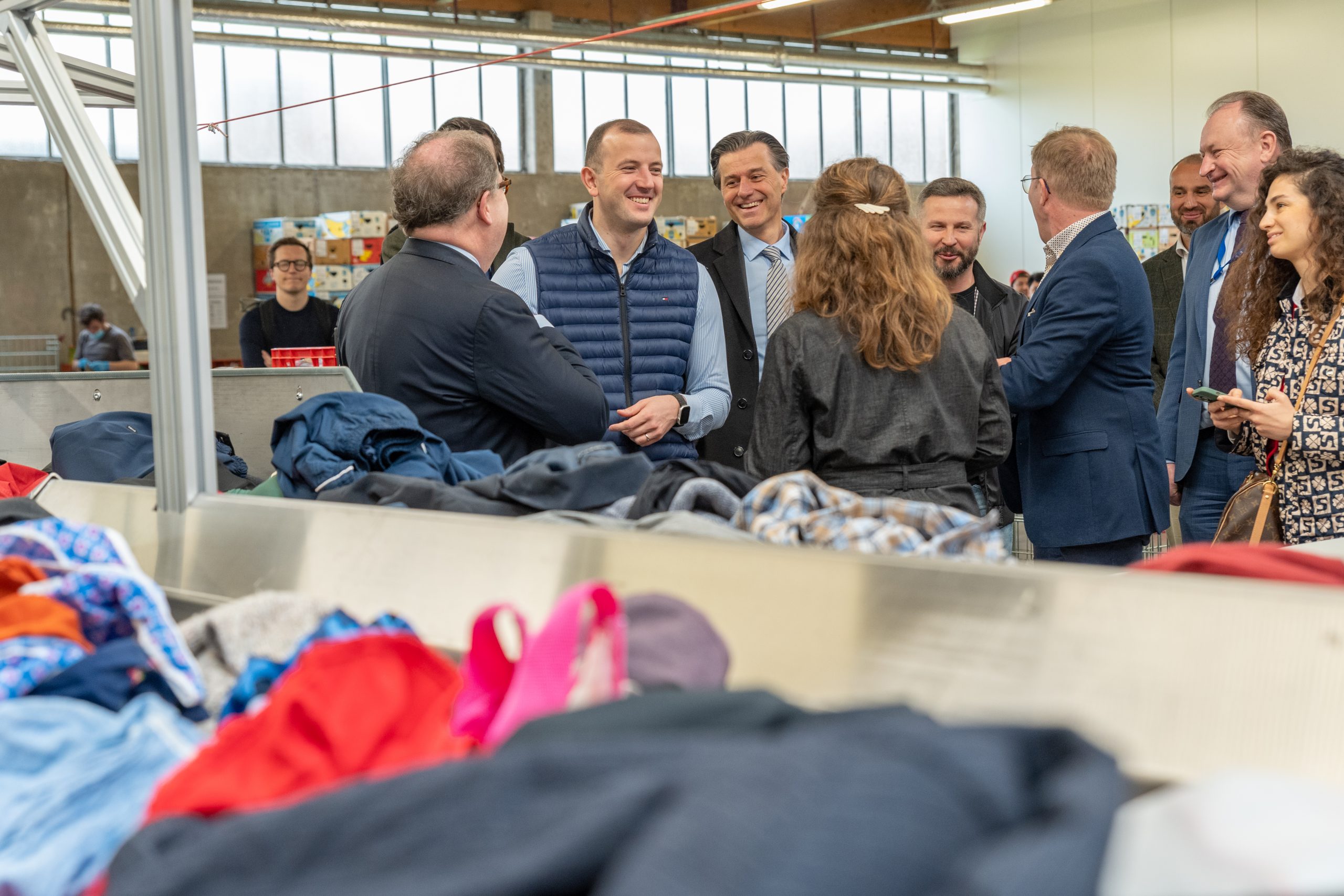 The 13th of April presented a great opportunity for RREUSE to join the European Commissioner for the Environment, Oceans and Fisheries, Virginijus Sinkevičius’s to the Kringwinkel re-use sorting centre for textiles in Aalst, Belgium, along with several actors active in the sector of re-use, repair, and recycling. Christoph D’Haese, the mayor of the city of Aalst welcomed the delegation. The event was organised by the EU’s representation in Belgium in the context of the European Action Plan for the Circular economy.

The tour of the facility was accompanied by insightful information on the sorting process, the quality standards, and the distribution process, as well as many chances to emphasise the social value of such initiatives. Re-use sorting centres create local, sustainable, and resilient jobs that help boost the Social Economy and the Circular Economy.

De Kringwinkel Stroom is a social enterprise active in re-use, serving a regional population of circa 200,000 inhabitants with two sorting centres and a network of six shops.  Alongside different types of household goods which they collect, they also collect 2,000 tonnes of textiles per year of which some 35% is re-used locally. Over 100 workers are in social employment. De Kringwinkel Stroom is part of a wider kringwinkel network, federated by HERWIN, a network of 94 member organisations out of which 28 are social enterprise re-use centres with 162 stores, we know how second-hand and social employment work and reinforce each other. The more than 5,800 employees annually collect around 83,000 tons of goods. More than half of them find a new home through De Kringwinkel.

The Commissioner noted that it is imperative for not just Europe but the global community to scale up when it comes to the way we deal with textiles. Only 1% of textiles end up in re-use or recycling facilities, with the majority of the 99% that is left going to landfills. He also highlighted the importance of re-use centres in boosting local communities and offering sustainable job opportunities to vulnerable people.

The visit was followed by an insightful roundtable discussion where many organisations’ representatives, including Gorik Ooms, the Policy Advisor of HERWIN, Luc Goeteyn of OVAM, the Flemish waste agency, and Veerle Moens of the department for work and social employment in Flanders, had the opportunity to present their activities, discuss their needs, and directly speak to the Commissioner about the latest proposals released by the European Commission: The new proposals to make sustainable products the norm and boost Europe’s resource independence. 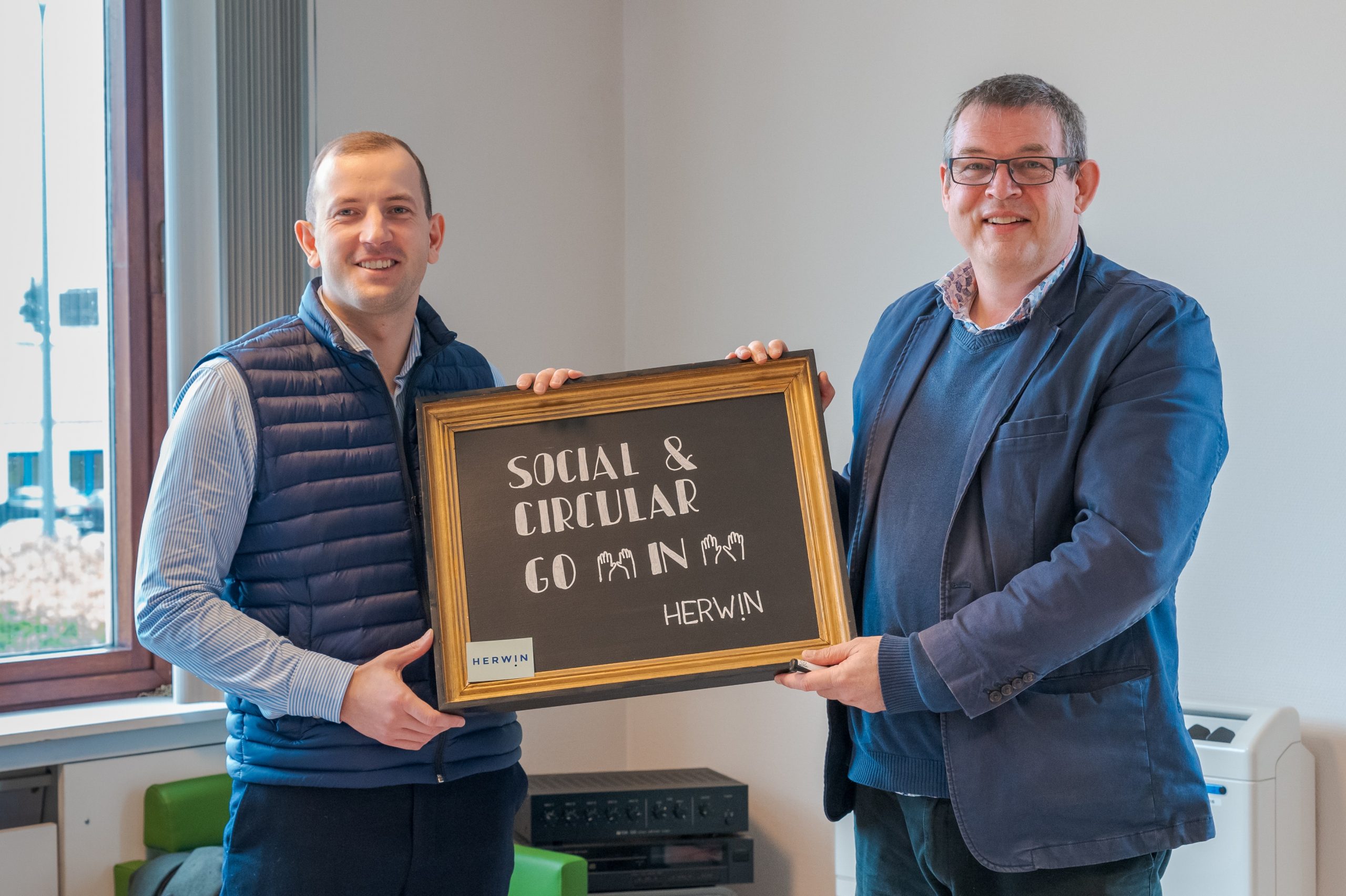 The message that was made very clear by Gorik Ooms of HERWIN, was that Social and Circular go hand in hand and should be treated as such.

The discussion ended with a final address from the Commissioner who emphasised the importance of sustainable, durable, repairable, and recyclable textiles and noted that despite the prices of clothing getting lower over the years, the amount spent by European households has increased. He especially focused on the significance of waste prevention, stating that thinking we can recycle our way out of this is an illusion. The Commissioner finally highlighted the key role of social enterprises in the collection of textiles and the creation of green jobs, with 30-35 jobs being created per thousand tonnes of textiles collected, as stated in RREUSE’s briefing on jobs.

The visit to the Kringwinkel re-use sorting centre and the roundtable discussion reaffirmed the commitment of the European Commission to prioritising waste prevention, ensuring sustainable textiles, and acknowledging the value of social enterprises in the Social and Circular Economy.

The re-use scene is very active both in Flanders, and in the Brussels and Walloon region through social enterprises federated by our network RESSOURCES.